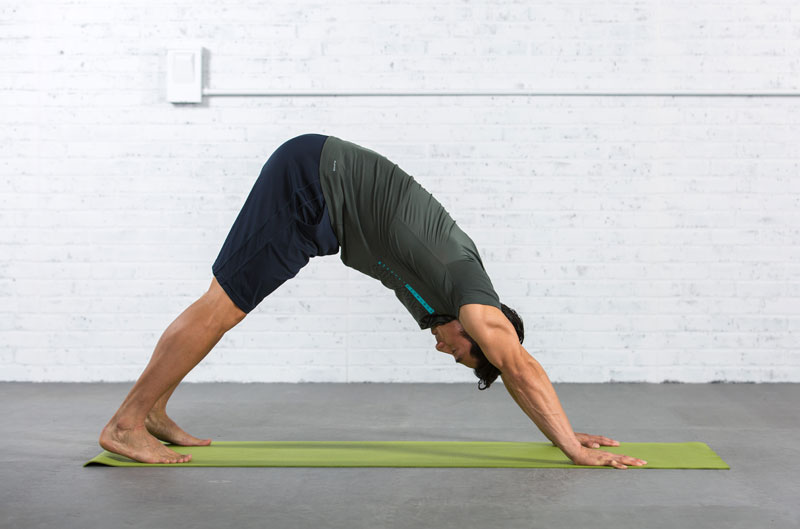 Begin in hands-and-knees position with knees below hips and hands positioned slightly forward of shoulders. As you inhale, spread fingers wide, rooting both palms firmly into the mat while simultaneously tucking toes under. As you exhale, begin to extend legs, drawing hips and tailbone toward t ceiling, creating an inverted V-shape with the body as the heels move toward floor. The head and neck should be positioned between the upper arms with feet situated hip-width distance apart. Focus on maintaining length in the spine in this pose, releasing shoulders away from the ears and keeping knees as softly or deeply bent as needed, while continuing to root firmly and equally through both hands and feet. Maintain this position, breathing comfortably for three to five complete breath cycles. 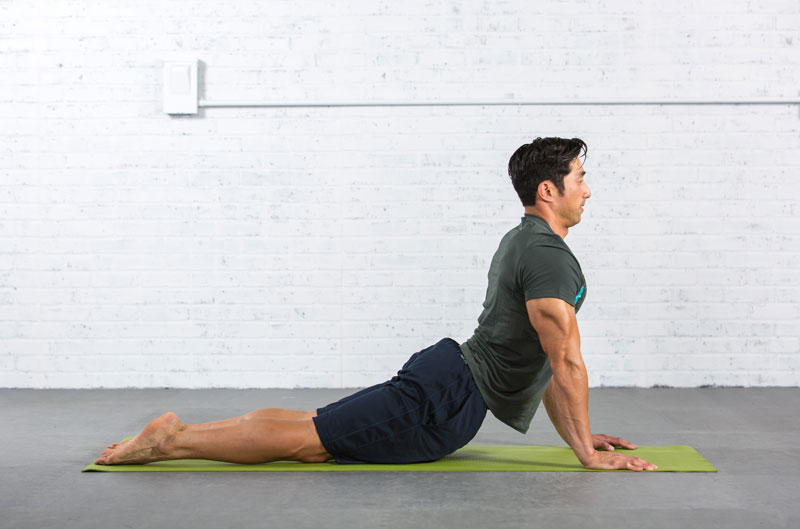 Lie on stomach with legs fully extended along the mat, with the tops of feet on floor. Place palms on the mat directly alongside the ribs, keeping elbows bent. As you inhale, press palms into the floor, extending arms while simultaneously lifting the torso and thighs off the mat. Allow hips to soften slightly toward the ground while at the same time lifting through the sternum. Soften shoulders away from the ears and maintain neutral alignment in the neck. If accessible, look upward only with the eyes. Maintain this position, breathing comfortably for three to five complete breath cycles. 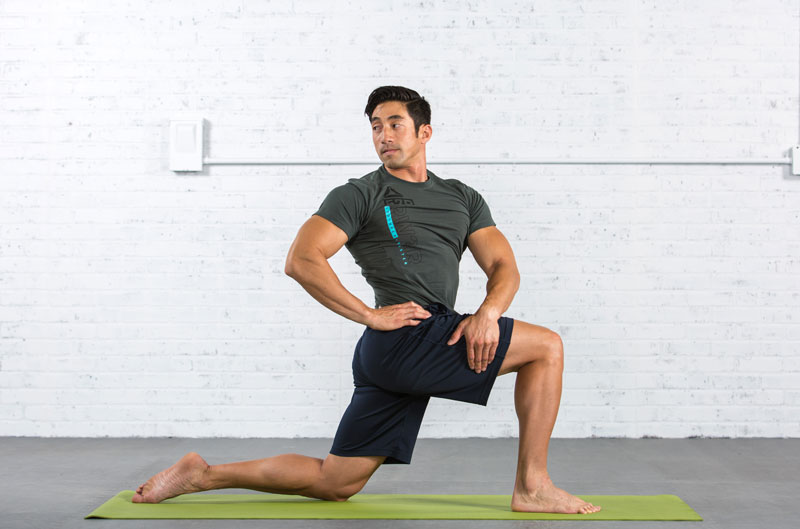 From downward facing dog, step right foot between hands, coming into a low lunge position. Immediately release left knee, shin and top of left foot to rest on mat. As you inhale, sweep both arms toward the ceiling coming into crescent lunge, shifting weight forward slightly to allow right thigh to draw parallel to floor. As you exhale, draw left arm across the body resting left hand to outside of right thigh while drawing right hand to right hip. Inhale to lean torso forward slightly while maintaining length in spine, then exhale to rotate torso toward the right side of the mat while drawing right shoulder back. Gaze toward the right side wall, maintaining this twisting position for three to five complete cycles of breath before switching sides and repeating. 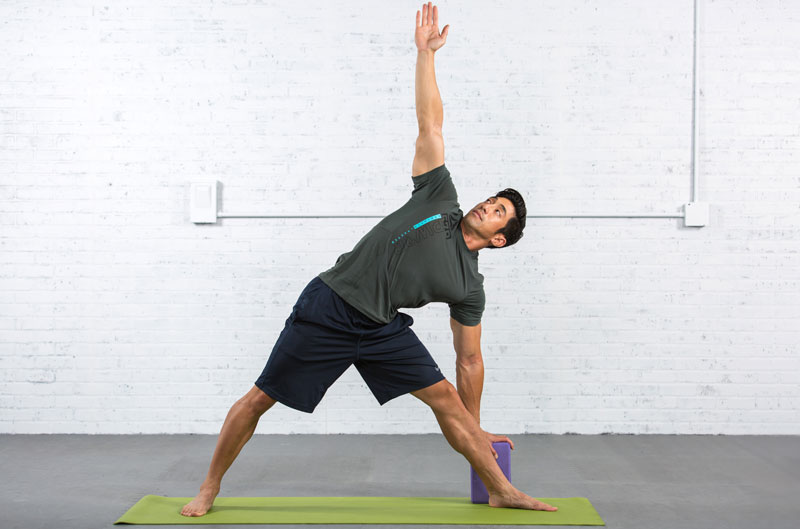 Stand at top of mat with feet together, placing a block at the tallest setting outside of the right foot. Step left foot back 3-4 feet, turning left toes toward left side of mat at almost a 90-degree angle with chest facing left side of the room. Align the heel of the front right foot with either the arch or the heel of the back left foot, depending on what is most comfortable for you. With legs extended, outstretch arms wide in opposition, reaching toward the front and back edges of the mat. As you inhale, reach right fingertips forward toward front of room. As you exhale, release the right hand to rest atop the block, drawing left fingertips toward the ceiling with arm in line with shoulder. Hold this position for three to five complete cycles of breath before switching sides and repeating. 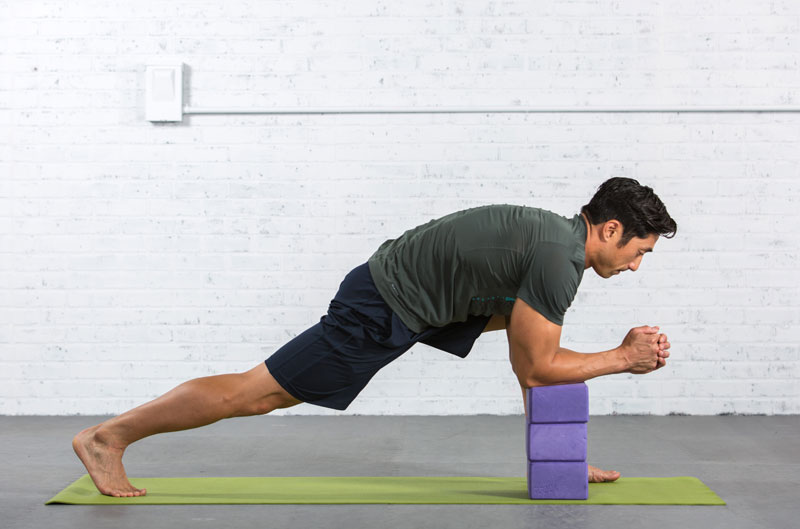 From downward facing dog, step right foot between the hands coming into a low lunge position, shifting weight forward slightly to allow right thigh to draw parallel to floor while remaining on the ball of the back left foot. Draw both hands atop a block positioned inside of the right foot, drawing foot slightly out toward the right side of the mat. Keeping hips and shoulders squared to the floor, release both elbows and forearms to rest on top of the block, continuing to press back slightly through the left heel. Maintain this position, breathing comfortably for three to five complete breath cycles before switching sides and repeating. 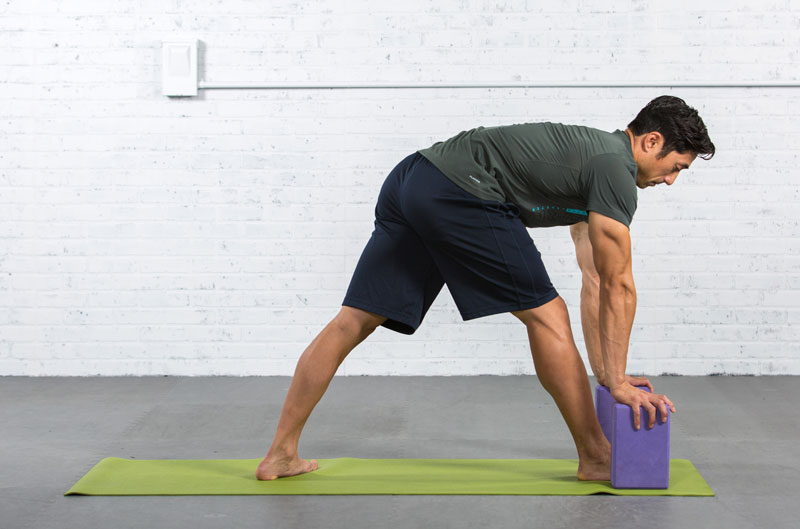 Stand at top of mat with feet together, placing a block on each side of the feet at the tallest setting. With hands on hips, step left foot back 3-4 feet, turning left toes out slightly, to approximately a 45- to 60-degree angle. Align the heel of the front right foot with the heel of the back left foot. Keeping legs extended, inhale to lift the chest slight. Maintaining an elongated spine exhale fold forward, hinging at the hips to release hands to the blocks. Square chest in line with right thigh then fold forward, deepening the stretch in the hamstrings. Maintain this position for three to five complete breath cycles before slowly rising and repeating on the opposite side. 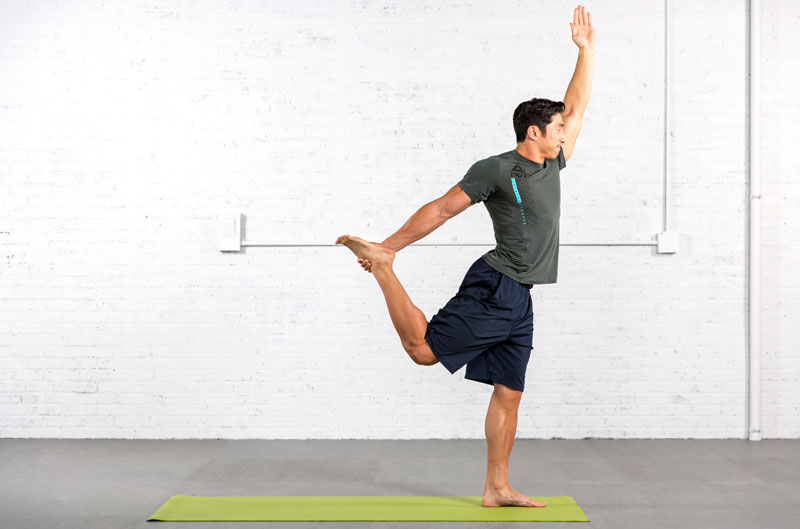 Stand at top mat with feet together, arms extended alongside the body. As you inhale, sweep both arms up toward ceiling, palms facing one another. With left arm extended bend right arm, drawing elbow in to touch right hip with palm facing up. Shift weight to left foot and bend right knee, drawing right heel toward right glute with knees close together. Keeping right thumb pointed toward back of mat, reach right hand back to capture inside of right foot. Inhale and extend the spine, reaching toward ceiling with left finger tips. On the exhalation, begin to press right foot into hand and right hand into foot, drawing right heel toward ceiling and right thigh parallel to floor. Continue lifting right leg as much as accessible while keeping hips and shoulders squared with chest lifted. Hold for three to five complete cycles of breath before repeating on the opposite side. 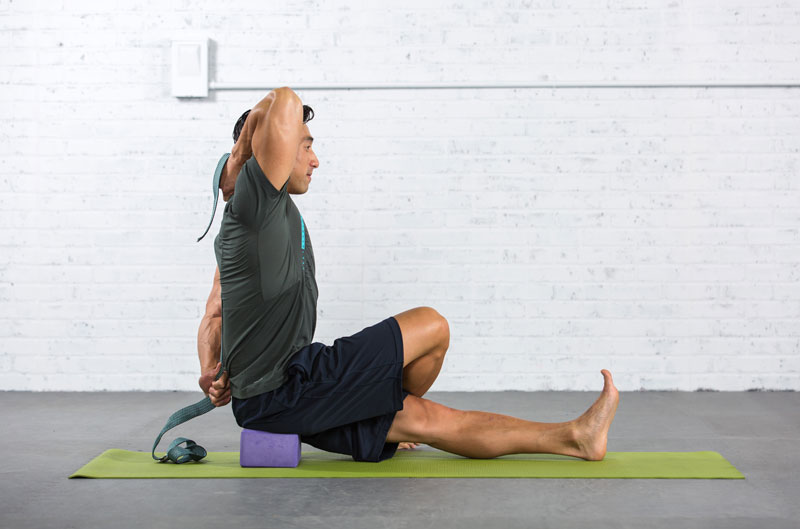 Begin in a seated position on mat with knees bent and feet flat on floor. Slide right heel toward left glute with toes pointing toward left side of the mat while aligning right knee to point forward toward front of mat in line with navel. Cross left leg over the right, stacking knees atop one another, allowing left toes to point toward right side of mat while rooting both sitting bones into the mat. Holding a yoga strap or towel in the right hand extend right arm up with palm facing forward then bend elbow, drawing right hand behind the neck with strap in line with spine. Extend left arm out toward left side wall with palm facing backward, thumb pointed down. Bend left elbow and draw hand behind the back to grasp the strap wherever is accessible. Work the hands as close together as possible while continuing to lift the chest, avoiding rounding shoulders forward. Maintain this position, breathing comfortable for five cycles of breath before releasing arms and uncrossing legs and repeating on the opposite side with arms and legs in reversed position.