Fitness professionals expend considerable energy helping people to lose weight, but there’s another way to view this challenge: What are the main factors that cause people to gain weight?

Understanding the specific behaviors that increase the risk of weight gain is essential to helping clients manage their weight. While most weight management articles focus on strategies and behaviors for losing weight, we will examine the other side of the coin: six factors that predict weight gain over the American lifespan.

Foods That Help With Weight Management. Studies also found that eating foods such as nuts, whole grains, fruits, vegetables, yogurt, diet (zero-calorie) soda, cheese and milk (low-fat, skim and whole) appeared to curb weight gain. Mozaffarian et al. (2011) explain that these foods have slower digestion rates (some being high in fiber) and appear to enhance satiety—the feeling of being full after a meal.

Sugar-sweetened beverages (SSBs) have little nutritional benefit and are reportedly the greatest provider of kilocalories in the American diet (Dennis, Flack & Davy 2009). In 2006, Malik, Schultz & Hu concluded that these drinks accounted for approximately 8%–9% of total energy intake in children and adults. SSBs contain carbohydrates of various forms, such as high-fructose corn syrup, sucrose and artificial sweeteners. Drinking SSBs has little impact on satisfying hunger (Malik, Schultz & Hu 2006), so people can consume large quantities without suppressing their appetite (Mattes 2006).

The body’s response to carbohydrate (of equal caloric value) differs depending on whether it is liquid or solid. In a crossover study, DiMeglio & Mattes (2000) found that people who drank SSBs gained significantly more weight than they did when consuming a comparable amount of carbohydrate in solid form. Subjects participated in both treatments, following each for 4 weeks, and the SSB treatment produced double the fat mass compared with the solid-carbohydrate intervention. Both carbohydrate sources were the caloric equivalent to three 12-ounce sodas per day in both treatments (DiMeglio & Mattes 2000).

Although more clinical trials are needed, several epidemiological studies suggest that weight gain is influenced by sleeping less than 7 hours or more than 8 hours per night (see Figure 1) (Marshall, Glozier 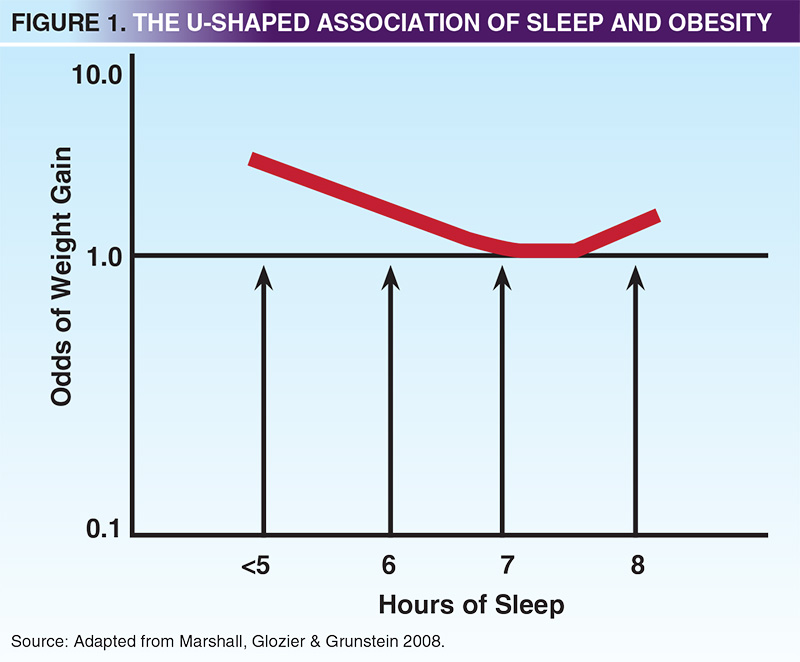 Length of time spent watching television is highly correlated with weight gain, especially in young people (Chapman et al. 2012). Chapman and associates tell us 58.9% of Americans watch television for more than 2 hours per day. According to these authors, epidemiologic studies reveal that those who regularly watch more daily television per day tend to

All these choices lead to weight gain.

Alcohol is very energy-dense—at 7 kcal per gram, it is second only to fat, with 9 kcal per gram; this creates a multitude of health issues. Aside from the pharmacological effects on the brain and on hormone fluctuation, the additional kilocalories from alcohol do not seem to replace energy consumption from other sources (Yeomans 2010). Therefore, energy consumption from alcohol augments overall daily calorie intake.

Yeomans adds that alcohol consumed before or with meals tends to increase food intake, probably by enhancing the short-term rewarding effects of food. Uniquely, Yeomans cites epidemiological data suggesting that alcohol in moderation can protect against obesity, specifically in women. This means that alcohol is somewhat dose-dependent and should be monitored closely, especially while eating.

It’s our business to know this, but there’s no harm in reviewing the science. In studying 15-year trends, scientists have noted an inverse relationship between walking and weight gain (Gorden-Larsen et al. 2009), suggesting that the more people walk, the less likely they are to gain weight. The researchers point out that older Amish people who walk an average of 18,000 (men) and 14,000 (women) steps a day have very low rates of obesity. Gorden-Larsen et al. (2009) suggest that adding 2–4 hours of walking per week is an attainable movement target.

Despite the documented benefits of exercise, only half of Americans (51.6%) participate in the recommended volume (150 minutes per week) of moderate aerobic activity during the week, while only 29.3% do muscle-strengthening activities at least 2 days per week. (CDC 2011). Furthermore, just 20.6% of U.S. adults (23.4% men and 17.9% women) meet both the aerobic and muscle-strengthening guidelines (CDC 2011). This means that the majority of Americans trying to lose or maintain weight will have a positive weight balance because they are not meeting the minimum physical activity guidelines.

Watching too much TV, not getting enough sleep, drinking too much alcohol and too many sugar-sweetened beverages, eating high-calorie foods and eschewing physical inactivity are clear indicators of an “obesogenic” lifestyle and should be the targets of any behavior-change plan designed to prevent weight gain (see Figure 2). Psychological stress accompanying these behaviors may exacerbate weight gain, so exercise professionals have to factor that into their interventions (Montes Kravitz 2011). Personal trainers may be best advised to expand their training efforts to address all of these areas with clients, to ensure successful weight management goals. 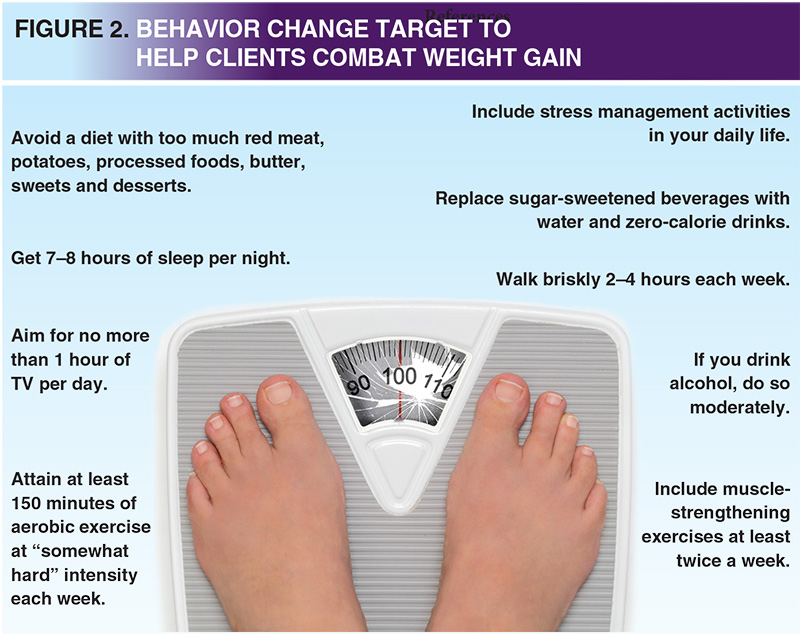