Get to know our friendly Fitness Together® Personal Training Staff at Rocky Hill. 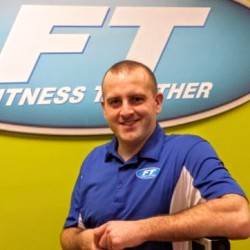 Michael holds a bachelor’s degree in exercise science and a master’s degree in health education from Southern Connecticut State University. He is a Connecticut certified physical education and health teacher. Michael opened Fitness Together in 2008 and has led his team of trainers in helping hundreds of people improve their health and fitness. Michael works hard to ensure his team of trainers is using the most up to date exercises and training philosophies. With so many myths, gimmicks, and fad diets popping up, Michael takes pride in sorting these out to learn what is right versus wrong.

In high school, Michael was a member of the baseball team, fencing team, and track team where he was one of the state’s top javelin throwers. He also practiced martial arts for over 7 years. Michael has been serving in the Army National Guard for over 19 years including a year in eastern Afghanistan. He enjoys incorporating his military training, martial arts, and other sport specific techniques into his workouts. He strives to push his clients further than what they believed was possible and teach them the science behind their training so they get the most out of every session. Michael stays busy in his downtime spending time with his wife and two children.