Secrets Revealed: What Men and Women Really Think About When Working Out 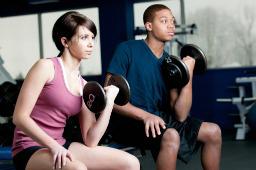 Working out and getting fit is made up of 50 percent physical exertion and 50 percent state of mind. While both parts are equal numerically, the mind game can really impact your results if you get pulled into worrying about how you look and what others around you are thinking. Especially, when it comes to working out among others from the opposite sex.

To help men and women become more comfortable with working out in the same area and get past some of the stereotypical scenarios associated with the battle of the sexes in a gym setting, two seasoned Fitness Together trainers and studio owners offer some real-world insight into what men and women really think about while working out. The secrets are finally revealed!

Men Tune into Workout, Tune out Those Around Them

Steve Kopshaw, personal trainer and studio owner of the FT Scarsdale and Wyckoff studios, says that the number one focus for most men in the gym is to get in, get the job done and get out. Whatever type of workout they are planning to do, men go into the gym with the sole purpose of achieving a specific goal for the day such as bench pressing a certain amount of weight or running a set distance on the treadmill. They care less about fraternizing with friends and would much rather plug into their headphones and listen to music so they can focus on accomplishing the task at hand.

“For most men I come into contact with -- including myself -- it’s all about going to the gym and getting the workout done.  That’s it,” explains Kopshaw. “Women think that every man is busy checking out all of the women in the gym, which is typically not true. That’s what we get blamed for the most, but probably do the least. Instead, I see more men checking themselves out in the mirror to make sure their biceps look good after doing a set of curls.”

Even though men tend to exude confidence about their workouts, they still have an underlining worry about looking tough and strong enough in the weight room, says Kopshaw. Men associate the number of plates and weights they put on their bench press bar to how strong and masculine they are perceived by those around them. And men who feel uncomfortable with the amount they can lift may even opt out of strength training in the free weights area and instead choose cardio or machines in the corners or sides of the gym.

“Nine times out of ten every guy thinks they were born knowing how to work out,” reflects Kopshaw. “So, guys go to the gym and work out on their own because they think they know what’s best. It’s important for guys and girls to realize that nobody is staring at you when you’re at the gym. The only guys or girls who are getting stared at are the ones who are looking for attention. These are the people who are grunting or posing in the mirror every 10 seconds. They're the ones doing crazy exercises and slamming things around.”

Women Focus on Working Out with Others, Beating the Clock

When women work out they tend to have more of a multi-focus approach, says Robin Ball, personal trainer and studio owner at Fitness Together East Greenwich. A woman’s thought pattern when she’s in the gym jumps from being tuned into accomplishing her workout to watching the clock so she can finish in time to head off to the next item on her to-do list. Women also are more social in a gym setting and enjoy working out with friends, joining in a group exercise class or seeking advice from a personal trainer.

“Women are somewhere between two mental places -– the actual workout and the clock,” says Ball. “When women are focused on the actual workout, they think about whether they will be able to complete the exercise and most think about one exercise at a time as to not feel overwhelmed. When women are focused on the clock, they deal with the chatter in their minds about what they have accomplished so far in the workout and what they need to do after the workout.”

Similar to men, women can be self-conscious about how others view their looks, fitness levels and knowledge of using certain equipment in the weight room. Women worry about putting on workout clothes with their "cellulite jiggling," says Ball.  While Kopshaw has had women clients tell him that they don’t want to work out with other men because they are worried about being stared at while bending over.

“No one is as critical of you as you are of yourself,” advises Ball. “It’s important for women to remind themselves that everyone is there to make improvements to getting healthier and stronger. It’s not a competition so it’s important to be kind to others and offer support when we can.”

Men and Women Share Goals, but Differ in Approaches

Whether you’re male or female, health and fitness goals of losing weight, gaining muscle or competing in an endurance event are pretty much universal. The difference lies in how men and women think about and approach accomplishing their goals.

In Kopshaw’s experience, men reach their goals faster than women not because of the higher metabolism or testosterone levels you often hear about, but because of a man’s more logical perspective toward things versus a woman’s more emotional perspective. When it comes to specific workouts, Ball believes women take a more balanced approach by mixing in cardio, strength and mind/body practices such as yoga. Men, on the other hand, tend to focus most of their efforts on building bigger and stronger muscles in the pectorals, arms and quadriceps.

Regardless of tactics and strategies, though, both sexes focus the majority of their thoughts as they relate to fitness on looking good, feeling good and being competitive in their favorite athletic event.

“One thing that men and women have in common is they tend to overlook the health benefits of exercise,” reflects Ball. “Of the 80 people I polled, only one person mentioned health as a benefit of exercising.”

The next time you’re at the gym and you find yourself wondering what the person on the treadmill next to you thinks about what you’re wearing or the size of your biceps, remind yourself that the only thing that really matters is that you’re both at the gym working toward your health and fitness goals. The gym isn’t where you go to judge or one up each other. Instead, focus on you and your specific workout to get the best results for both your mental and physical health. There are no secrets when it comes to the benefits of leading a healthy and fit lifestyle!