Why Partial Squats Are A Bad Idea

I hear this bandied about in some circles - "don't squat low, it'll hurt your knees." And every time I hear this, I (sometimes) resist a sigh as I think "here we go again" before I have to launch into mythbusting mode again.
The idea that full squats hurt the knees is, like the whole "starvation mode" myth, one of those memes that gets repeated a lot but nobody really seems to know where it comes from. After well over a decade of perusing journal articles looking for references, I have yet to come across a single point of research which supports this. So let's take a brief look at how a squat functions:
What Is A "Full Squat"?
For the sake of completeness, let's define a "full squat". A squat is considered full-range when the crease of the hip lines up horizontally with the top of the patella. If you take a look at this picture, the person on the left is exhibiting a full-range squat: 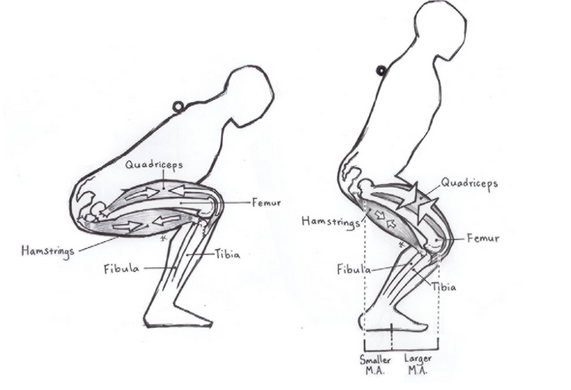 What Happens During A Full Squat

A whole volume could be written on all the things happening in the body when a squat is performed, but I will give a very bare-bones, superficial look at the major points. As the trainee (let's call her Betty) sits back and down, the hamstrings and glutes act in synchrony to contract and control the descent (termed the eccentric portion of the movement). The quadriceps on the front of the thigh and the muscles around the midsection isometrically contract to help hold Betty upright (because falling over during exercise is generally considered a bad thing to have happen). As Betty descends past the 45-degree mark, the quadriceps now have to lengthen in order to allow greater contraction (read: activation) of the hamstrings. This also enables increased dorsiflexion of the ankle (decrease in angle between shin and foot) as the tibia shifts forward to provide more stability - this is where the calf muscles increase their isometric recruitment to the movement. At the bottom of the squat, the core muscles of the midsection, hamstrings, and calves are all maximally contracted to hold the position.

As Betty begins the ascent, the hamstrings now become the stabilizers as they re-lengthen and the quadriceps now contract as the knees and hips extend in synchrony. The tibia shifts back slightly as some of the calf recruitment is relaxed. What has just happened is a balance between the muscular recruitment of front (quads, anterior tibialis, abdominals, hip flexors) and back (glutes, hamstrings, erectors, calves). During the full squat all muscles operate in balance and work together to effect the desired movement.

What Happens During A Partial Squat

A partial squat allows for just that, a partial recruitment pattern of what a full-squat normally entails. Unfortunately for Betty's partner Bruce (on the right in the picture), muscle imbalance is guaranteed and the chance for injury is thus higher.

Bruce inhibits his hamstring recruitment by only going down partway. This forces the quadriceps to bear the brunt of the load early on, as their initial isometric contraction can't relax from the stretch of descending deeper. Concurrently, the hamstring contribution to the exercise is very limited as hip extension is severely shortened. What typically happens here is the knees tend to "slide" forward, creating shear forces within the knee joints. Sliding knees are not as much of a concern at the bottom of the squat, as muscular contribution is at it's maximum and the joints themselves are best protected when the surrounding musculature is activated and contributing. In a partial squat however, when muscular recruitment is minimal, the knees must bear the brunt of the load.

A surefire way of ascertaining whether or not someone is qualified to speak on squat form is by asking them one simple question: "Is the squat driven by the hips or knees?" If they answer with "knees", go find someone who knows what they're talking about! The squat is a "hip-driven" exercise - the hips (carrying the largest musculature in the human body) are what enable correct performance. Think of your lower body as a vehicle - the hips are the driver and the knees are your passengers. The knees come along for the ride but the action occurs around the hip joint. In proper squatting form, hip flexion (descending) and extension (ascending) are the prime movers - knee flexion and extension happen by virtue of the changing angles at the hip and ankle joints. When squatting, drive with the hips.

Is It Ever Okay To Do A Partial-Range Squat?

In certain select instances a partial-range squat may be better than none at all:

If partial squats are being performed because you can't just seem to get lower (tightness) or are afraid then it is strongly advised to talk to your fitness professional about what may be limiting you and how that can be overcome. A healthy person continuing partial-range squats (especially with a load) not only loses much of the benefit of the squat movement, but is most certainly opening themselves up for faulty movement patterning which could lead to complications (and possibly injury) later on.

This was a very brief summary of the muscular mechanics behind the squat movement. It is apparent that squatting as low as you can go in good form (i.e. with a tight back angle) is not only more advantageous in terms of strength-building and workload but is also safer for your joints. Happy squatting!