What foods aren't as healthy as I think they are? 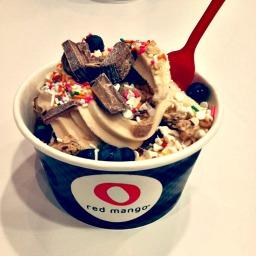 "Frozen yogurt seems so much better than ice cream. And in the world of saturated fat, it is.  But in terms of calories and simple sugars, they’re closer than you think. Once we load up the frozen yogurt with sugar- and fat-laden toppings, it’s pretty much equal to its ice-cream counterparts!

"Although healthy trail mix is possible -- one made with just nuts, some dark chocolate, and some dried apricots is an option -- most of the versions at the store and yogurt shops are loaded with candy-coated pieces, yogurt-covered raisins, sesame sticks and deep-fried banana chips. If you put your hand in the bag twice, you're looking at almost 600 calories chock-full of simple sugars, trans fat and refined carbohydrates! And if you're topping your frozen yogurt with it, you probably won't be getting back into your high-school jeans any time soon!

"One option: Buy yourself a Yonanas machine. It turns frozen fruit into soft serve ice cream. You can find them at Target or Bed, Bath & Beyond stores for about $50. Then top with some nuts and mini dark chocolate chips and you have a satisfying treat that's much healthier, not to mention much lower in calories!"

"When I think of foods that aren’t as healthy as most people think the first thing that comes to my head are dried fruit products.  Although dried fruits are full of fiber and much better for you than something like a bag of chips, these products are most times filled with added sugar.  Also, the fruits lose a lot of their natural nutrients during the drying process, which take away from the nutritional benefits.

"Another fruit alternative that most may consider being healthy but actually are not are fruit cocktails.  Most fruit cocktails, like dried fruit, are full of added sugar.   Whether they are in cans or little cups, the sugar content on these sweet treats is definitely something to pay attention to.  The best option is simply to stick to the fresh alternatives.  They keep you feeling full for a longer period of time and they are much healthier for you." 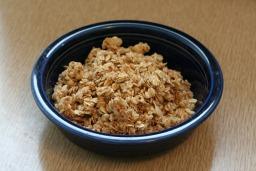 "Often billed as healthy on the package, granola packs a whole lot of calories in a very small serving. Even worse -- since very few people eat just half a cup, which is the typical serving -- that seemingly good-for-you granola can start to approach 500 calories when you down it by the fistful, without the milk or anything else. These packs can also be full of extra sugar and fat."

"I would say the general category of grains is a problem as it is perceived as being so good for you when virtually every nutrient they provide can be found in other sources that have more nutrient density. Also, the way we process most grains these days leaves them with very little of the nutrient value they are supposedly providing to us. And also it must be remembered that corn is a grain and variants of corn are found in many, if not most, of our processed foods. Corn on the cob is one thing, whereas high fructose corn syrup is another thing all together."

"Fast food salads are always deemed a "better" option when eating out, when in reality they are just as bad as some of the burgers on the menu. Here's a breakdown of a few chicken Caesar salads:

"Some of those start approaching the totals from huge fatty burger meals. For example, a typical Quarter Pounder at McDonald's is 520 calories with 240 of those calories from fat. That's only 190 more calories than their salad. Just because it's green doesn't mean it's healthy!" 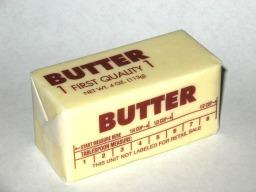 "Despite what the media has led people to believe, butter is NOT a heart-healthy food. Butter is rich in saturated fat and dietary cholesterol, two types of fatty substances that have proven to raise the risk of coronary artery disease. Butter is a major source of saturated fat intake in the U.S.

"Americans are thrilled to hear this news as the trend is to move away from processed foods and back to delicious butter, which is considered more of a natural, “real” food. With all the fear about trans fat (man-made hydrogenated fat), and the misleading remarks about saturated fat not being so bad after all, people are starting to erroneously believe that butter is now heart-healthy. Plus, there is nothing like the taste and texture of real butter.  And so Americans have simply thrown caution to the wind and really don't know or care that they are eating that much butter.  In fact, butter consumption is at an all-time high -- a dangerous trend that will surely contribute to an increase in American deaths from cardiovascular disease.

"Perhaps if the public was reintroduced to the fact that butter is NOT a healthy fat and that it contributes to disease, then they would become concerned with their consumption.  The fact is that the best way to fight heart disease is to consume a Mediterranean diet, low in saturated fat and rich in the two healthiest butter alternative fats: olive oil (monounsaturated fat) and fish (omega-3 fat)."