If I stop my physical activity, will my muscles turn to fat?

As a personal trainer one of the most asked question is, "does muscle turn into fat?" 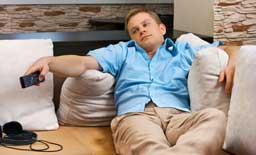 Well, the short answer to that is no.

First, one must understand the difference between muscle and fat.  Muscles are primarily
made up of fibers and filament.  Your brain sends messages through your central nervous system, which relays those messages to the filaments.  Those messages travel via electrical current, which cause the fibers to contract.  Fat or fat cells on the other hand are primarily made of adipose tissue.  They specialize in storing energy.  So if you eat more than you burn off, your body will store the excess energy in the fat cells.

In conclusion, people who train consistently place greater demands on their bodies.  Due to the greater demand the body requires and can utilize increased amounts of calories.  The body would then convert those calories into to fuel for the workouts and recovery.  It's typically when that individual stops the training but maintains the higher caloric diet when the illusion of muscle turning into fat occurs.  Muscles get smaller and fat cells get larger.

If you stop physical activity your muscles won’t turn to fat.  While, it’s simple to think of it that way, it’s a bit more complex than muscles just becoming fat.  You will indeed lose muscle due to the sudden decrease in physical activity, and you may gain weight, but they aren't necessarily a result of one another because you can lose muscle without gaining fat and you can gain fat without losing muscle.

What will change is your body fat percentage, which is a better indicator of the muscle to fat differential in one’s body.  A stop in physical activity will affect the body in many ways by changing the body’s metabolism and the amount of energy expended each day, but it’s certainly more complex than muscles turning to fat.  Diet needs to be factored into the equation as well.  In the end, a stop in physical activity will more than often result in a decrease in muscle and an increase in fat, but they aren't equally or strictly inversely related.

Muscles do not turn to fat when one stops exercising. But, why would you want to stop exercising? Not to self: STICK WITH IT.

When one stops training, all of the hard fought gains are lost. With out the “push” of training, the body merely returns to the former state it was in.

Muscles atrophy, that is, they shrink away due to lack of stimulus to remain. That’s why you may feel a little less hard or full or tight after missing a training session.

What generally happens is when one quits training, the muscles atrophy and our eating changes as we have lost the “big mo”……the momentum,  that exercise brings to that facet of our lives.

If you eat poorly once you quit exercising, the result will be gains of fat, but not due to muscle turning into fat. Muscle does not become fat.