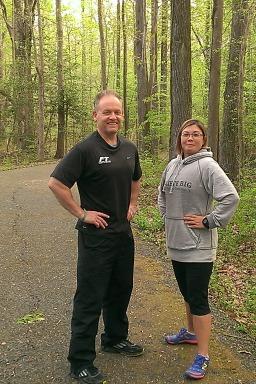 When novice runners decide to compete in their first race, they often turn to a couch-to-5k type of program as a starting point to running and getting fit. With the help of a Fitness Together® personal trainer and support from a local running group, Nancy Bouchal blew the couch-to-5k training approach out of the water when she decided to get off the couch, hit the pavement and run her first 5k and half marathon race within one month of each other.

Since deciding to lace up her sneakers and take the fast path toward accomplishing advanced running goals, Nancy has completed two marathons, multiple half marathons and various other shorter distance races in the past three years.

“When I set out on this journey, I wanted to lose weight and get in shape,” explains Nancy. “But since I’d never run 13 miles before, I thought I might as well give it a try.

"I have a stubborn streak in me and whatever I set my mind to I pretty much accomplish it. When I asked my husband if he thought I was crazy to think I could train and run a half marathon in four months, he said yes, but he knew I would do it.”

The turning point for Nancy from being a non-active working adult in her late '30s to becoming a marathon runner didn’t happen in the gym. Rather, it was in a business group she initially attended to meet her networking goals where she ended up stepping into a running lifestyle that has positively affected her health, physique, attitude and career.

In June of 2011, Jim Cleveland, personal trainer and studio owner at Fitness Together® Severna Park, told Nancy’s networking group that if anyone was interested in running, he was setting up a half marathon training group. Nancy became instantly intrigued by the challenge and in four short months she finished the Baltimore Half -Marathon in 2 hours and 31 minutes. A year later, she finished the full Baltimore Marathon in 5 hours and 22 minutes.

“Nancy basically got up off the couch, turned to her husband and said she was going to start running,” recalls Jim. “I remember the first time she came out for a training run.  She had covered a certain amount of distance and she had to stop. As an FT group, we stopped, went back, encouraged her to not give up and to join us the next time we went out.

"Nancy later said that those words of encouragement spoke volumes because she felt if she wouldn’t have had that kind of support and encouragement in the beginning, she would have hung up her shoes early on. We didn’t let her off the hook. Today, through running training, she has built an outward confidence that says, ‘I can do this.’”

When Jim started training Nancy, he gave her an all-encompassing program that not only focused on logging enough miles to meet her race-day goal, but also included augmenting weekly runs with resistance training and tracking her daily nutrition. Another component to Nancy’s training approach also included building accountability to herself and to those she was training with either in small group classes at the studio or during long runs. Jim focused on making sure that Nancy understood how to replenish and fuel her body with proper nutrients pre- and post-run, as well as appreciate the importance of balancing out her lifestyle with training, work and family so she wouldn’t become too consumed with her training.

“Jim has always been very positive and motivating,” says Nancy. “He was a big part of why I started running. I couldn’t have done it without him and our running group in the beginning.

"I have a different attitude now. Running isn’t a daunting task anymore – it’s something I enjoy doing and will continue to do.”

With two completed marathons under her belt and the desire to continue running burning strong, Nancy plans to run the Baltimore Marathon again this year and she hopes to get into the Marine Corps Marathon again next year as well. She may try broadening her horizons by signing up for a future triathlon, but Nancy is happy with everything she has accomplished so far.  She looks forward to improving her times and getting into some of the big headliner races as well. And she plans to continue training at Fitness Together to help build her strength and speed as it relates to her running events and fitness goals.

“I live by the philosophy that winners never quit and quitters never win,” shares Nancy. “You have to have strong support, mindset and motivation to run your first marathon and to keep doing it. There is a quote I saw a long time ago by John Bingham that I still use today for inspiration – ‘The miracle isn't that I finished. The miracle is that I had the courage to start.’”

Jim echoes Nancy’s sentiments that the races are what you’re training for and they’re your ultimate goals. But the training is the real journey where you transform your mind and body into a confident, strong athlete. And this transformation often spreads to positively influence all areas of your life.

“Anyone can get out of a chair and say they’re going to do something like running,” says Jim. “But with support, encouragement and regimented training, Nancy made it a part of her lifestyle. Taking on an event like running a marathon is a life-changing experience and you’ll never be the same person as when you started training.

"Nancy’s strong will has been personified even more by having these events in front of her and achieving them. She has even won more respect from her peers in the business world after accomplishing her fitness goals.”