Fitness Together® Alexandria Client Turns to Exercise to Look Good, Feel Great As He Approaches 60*

As we age into the middle years of our lives, we take notice of what others in our age group look like and what type of condition their bodies seem to be in. When Philip Tasho approached his mid-50s, he didn’t like what he saw in his peers or himself. So he decided to do something about it.

Even though he disliked exercising and would much rather spend his time doing anything else, he was determined to lose weight, get fit and look fabulous as he ventured into his golden years.

“I’m someone who hated working out. But, the great thing about Fitness Together® is that they have the best staff who understands your pace and takes the time to know what works for you. I’ve received consistent training for the past five years, even as trainers have come and gone,” explains Philip.

“For me, FT’s approach was perfect. The trainers were patient with me, I was patient with the results and it all just came to fruition.”

When Philip started working out at the Fitness Together® Alexandria studio five years ago his goals were to lose weight, look better and feel better. Today, he has lost approximately 20 pounds since he started at Fitness Together® and he feels like he’s in the best health of his life. He is enjoying the results of living a healthy lifestyle and he believes that being in good shape prepares you for whatever comes your way as you age, whether it’s surgeries, physical ailments or common aging conditions. 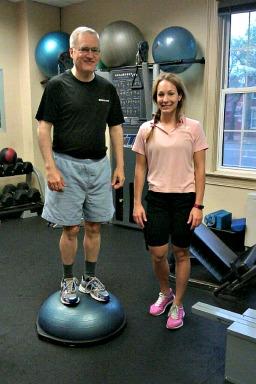 As Philip prepares to turn 60 this year, he stays motivated to keep moving forward in his fitness journey with the support and dedication of his current trainer, Dominika Cihanova. Dominika strives to continually challenge Philip and changes up the routines as he progresses.

“The first thing I noticed with Philip was his potential to grow, become stronger and build more muscle,” explains Dominika. “Philip told me early on that his goal is to look fantastic so I told him we could do that. I focus his workouts on step-by-step building on each exercise we do.

"Philip is such a dedicated client and a hard worker. It’s my pleasure to work with him.”

Dominika started out focusing Philip’s workouts on strengthening his core -– lower back and abdominal muscles -– so that he could build a strong foundation to work from. As his core tightened, his form on other exercises improved and he started getting stronger.

As Philip became more physically fit, he was able to increase the weight and repetitions of his strength training exercises. Now, Dominika is working with Philip to decrease his recovery time between sets and exercises to build more endurance and stamina.

“Before, it was harder for Philip to continue working out for 45 minutes,” says Dominika. “Today, he pushes hard from the very beginning to the end.”

“One of the biggest positives for me has been the amount of energy I have now,” shares Philip. “I feel a lot better so I’m able to do a lot more things than I thought I could ever do and I have so much more stamina.”

In addition to having an overall better feeling about his life and his state of health, Philip also has received positive feedback about his health and well-being from friends, family members and even doctors. Last fall when Philip had to undergo surgery to remove a tumor from his kidney, his doctors said that he was able to recover a lot quicker from the surgery than others his age due to being in good shape.

Philip recovered from his surgery in only 2 ½ weeks and within a month was back into his regular routine at Fitness Together.

“It’s easy to take your health for granted when you’re younger,” shares Philip. “But, as you get older, you think about maintaining your health more. Things happen in life and you want to make sure that you’re better prepared and positioned to deal with whatever life throws at you. Being in good health and good shape is a big positive first step.”

“For me, working out was always a struggle,” continues Philip. “But through training at Fitness Together, I’ve made working out a routine and not a struggle anymore.”

Philip plans to continue thriving at Fitness Together® and accepting the challenges that his trainer Dominika sends his way. He doesn’t take his health for granted any more, but stays focused on living a healthy and fit lifestyle. And, he’s looking and feeling fabulous while he’s doing it.