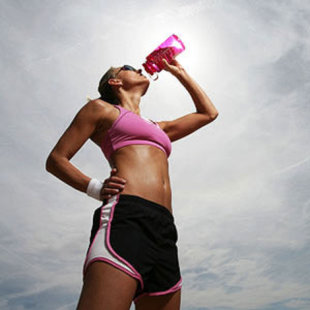 If you want to perform like a pro athlete (and who doesn't, really?), news flash: It's not all about the training. You are what you eat, too. "The intensity of women's training has increased, and with that, the need to refuel correctly is more vital than ever before," says sports nutritionist Dawn Scott, a fitness coach for the U.S. Women's National Soccer Team. So we asked the experts to serve up some of their favorite nutrition advice to help you get stronger, faster, and fitter than ever before, no matter what you're trying to master.

Related: QUIZ: How Competitive Are You?

#1: Don't Skip Breakfast
"One of the biggest mistakes athletes make is heading out for a run in the morning without eating anything first," says Dan Benardot, PhD, RD, director of the Laboratory for Elite Athlete Performance at Georgia State University in Atlanta, who works with Olympic distance runners (10,000m and up) and oversees the nutrition program for U.S. Figure Skating. Your blood sugar is already low when you wake up, so you should have something carb-laden to eat, like half a bagel or some toast, as soon as you get out of bed. That way, 30 to 45 minutes will have passed before you actually head out the door. If you're not used to eating in the morning, start small, says Benardot. Drink a glass of apple juice before your workouts until your stomach adjusts, and then add in a piece of toast. Mixing in protein (cream cheese, peanut butter, yogurt, etc.) is fine, but it slows down your gastric emptying rate, so you'll need more time between when you eat and when you hit the road.

#2: Stay Hydrated 24/7
Drinking water while you work out is great, but if you start your race on empty, you're never going to finish as strong as you want. Athletes should be consuming .5 to 1 ounce of H2O per pound of body weight every day, says Amanda Carlson-Phillips, vice president of nutrition and research for Athletes' Performance in Phoenix, Arizona, who regularly consults with Olympic contenders and pros. You also shouldn't wait until race day to see how your body responds to whatever beverage they're handing out along the course, says Benardot. Sip on the same beverage during your training runs to stay hydrated and save yourself from any future tummy troubles.

#3: Boost Your Immunity
One of the best things you can do to better your performance is to stay healthy, which means that you need a good amount of antioxidants and superfoods in your diet. Beth Duryea, head soigneur for the Specialized-lululemon women's cycling team, says she encourages all of the riders, including Olympic contenders Evelyn Stevens and Amber Neben, to incorporate whole-grain carbs, lean proteins, and colorful fruits and veggies into their snacks and meals every day. The more color on your plate, the better, she says. Duryea also recommends taking a daily multivitamin, such as First Endurance Multi-V ($49.99, firstendurance.com), which is designed specifically for endurance athletes. Carlson-Phillips also suggests stocking up on Greek yogurt, which is high in probiotics, as another stay-healthy tool. Sprinkle some walnuts and fruit or flax seeds on top for a bonus antioxidant boost.

#4: Lift Some Iron
According to experts, it's quite common for female athletes (yup, even the pros) to be deficient in iron, which could slow you down and increase your risk of injury in any sport. So be sure to include plenty of iron-packed products, such as oatmeal, fortified cereals, red meat, and spinach, into your meals, says Scott.

#5: Don't Diet
"The biggest nutrition mistake I see female athletes make is reducing and/or limiting their caloric intake in an attempt to be lean," says Scott. "This causes reduced stores of carbohydrates in your body, which are essential for training and performing, and can then lead to muscle breakdown, as your body eventually starts to use protein as an alternative fuel source."

#6: Crank Up the Carbs
If you wait until the day before your race to carbo-load, you're too late, says Carlson-Phillips. "You need to focus on your nutrition every day, and then the night before is a good time to simply top off your fuel stores," she says. Plus, notes Benardot, when you consume too many carbs at once, your body can't use it all, so it stores any excess as fat, which will do you no good come race day. To ensure you're not eating too much the night before, simply replace one protein or veggie portion of your plate with another serving of carbs.

For race morning (if your event lasts more than an hour), have a high-carb, low-protein breakfast, like a bowl of cereal with a little milk or half a bagel, a couple of hours before the start, says sports dietitian Alicia Kendig, athlete performance lab coordinator at the U.S. Olympic Training Center in Colorado Springs, Colorado. (Note: Now is not the time to try anything new!) Continue to drink fluids, like water and electrolyte drinks, until about 15 minutes before go-time.

#7: Finish Strong
Refuel during your race to finish as fast (or faster) than you started. Depending on your event, you should be taking in about 30 to 60g of carbs per hour to replenish your glycogen stores and continuously consume fluids. "I see a lot of triathletes overdo it on calories and underestimate the value of hydration," says Kendig. "But if you're not hydrating along with those calories, then it will lead to an upset stomach."

#8: Recover Right
Immediately after you finish a high-intensity and/or endurance activity (within 30 minutes), you should consume something made with a mix of protein and carbs, like a glass of chocolate milk or a whey protein shake. "This will help reduce muscle soreness and aid in your muscle recovery," says Benardot. Duryea says that the members of team Specialized-lululemon have a solid, post-race recovery routine to kick start the restoration of their muscle glycogen stores and prep for their next session: Within five minutes of finishing, they will have had water or an electrolyte drink. Within 15 to 20 minutes of finishing, they've consumed a recovery drink that contains 20g of a high-quality protein blend and at least 60g carbs. And within one hour of finishing, they've consumed a whole-grain sandwich with lean meat or egg, cheese, and salad filling. "Even when you're not racing, you should be making choices that will help your body recover faster," says Carlson-Phillips. Avoid processed carbs, which increase inflammation, and opt for anti-inflammatory foods, like cherries, walnuts, and kale, instead.