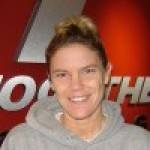 Owner of Fitness Together Overland Park

Jenny Schmidt has been with Fitness Together since August of 2004. She enjoys the one on one interaction with her clients and helping them achieve all of their health and fitness goals. She played Division 1 basketball at Illinois State and professional basketball for 4 years both overseas and here in the states. Jenny graduated from Illinois State in 1999, and was recently inducted into the Illinois State Athletic Hall of Fame in October 2012.

Additionally, Jenny played quarterback for the Kansas City Tribe (2008-2012) and the Kansas City Titans (2013) in the Women's Football Association, a women's professional tackle football league. In 2010 she was a quarterback on the first ever USA women's National Tackle Football Team and helped them win the gold medal in Stockholm, Sweden.

Being physically fit and active has always been a big part of Jenny's life through sports and fitness training. She now hopes to help others realize the benefits of a healthy, fit and active lifestyle at Fitness Together.

Jenny has earned personal training certifications through NSCA, ACE, Fitness Together, and the Professional Fitness Institute in Olathe, KS.

She took over ownership of Fitness Together Overland Park on December 1, 2012.