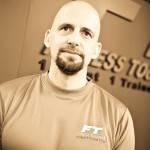 Steve and his wife Karen opened their first Fitness Together in 2008. Over time, they have grown to own four studios in total - two located in Grand Rapids, one in Holland and one in Okemos. They have three grown children and one awesome grandson. Steve and Karen both grew up in the West Michigan area. "We absolutely love being part of this community and offering a product that changes peoples lives." Steve runs all of their Fitness Together studios and handles the day-to-day operations. Karen is an assistant principal at NorthPointe Christian Elementary in Grand Rapids. She was previously a teacher at NPC as well as Chandler Woods. Karen and Steve met at Cornerstone University and have been married for 27 years. Together they enjoy running, working out, and spending time at there cottage on Chippewa Lake.